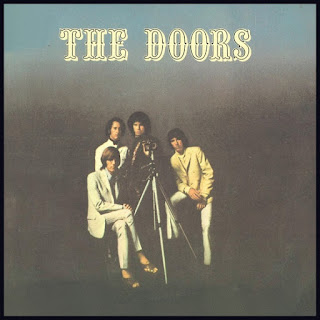 Self made re-imagining of original album 2019.

I've been dipping in and out of The Doors back catalouge for the last five or so years after a very long absence. I've always been intrigued by their fourth and most derided L.P., 'The Soft Parade'.

No one's favourite Doors album, 'The Soft Parade' had the band seemingly conforming to the commercial; horns, string arrangements, 'Touch Me'. The less ornate songs seemed unfocused, especially compared to the previous year’s effort 'Waiting for the Sun'.

There are fantastic songs on the album and also in recordings they made, both live and in the studio, around this time.

The material for the original album took place from November 1968 into February 1969, with a couple of earlier recordings from 1968. The band had toured up until recording and had no new material written. Producer Paul A. Rothchild insisted the group record multiple takes of songs written in the studio and was also responsible for the insistence on horn and string overdubs over several of the songs.

The album ran over budget and over time.

The album is disappointing compared to the earlier releases, not just in the material; the album had only nine tracks and ran not much over 30 minutes.

There are several Doors originals not included on 'The Soft Parade' that are the equal and in some cases superior to the released material. Put together as a whole, it makes a lot more sense and I think would have been viewed differently if The Doors had released a double album, including live recordings and more improvised material left off the original L.P.

This re-imagining of 'The Soft Parade' is that of a double L.P.; 4 sides running approximately 18 minutes in length and is thematically sequenced.

Side 1 is a set of unreleased and original album songs that retain the familiar Doors sound. 'Wild Child', 'Shamen's Blues' and 'Do It' all feature on the original album, as does 'Easy Ride'; a leftover from 'Waiting for the Sun'. 'Whiskey, Mystics and Men' went unreleased. I'm not sure why, it sounds like classic Doors. 'Push Push' is a much bootlegged jam, presented here in an edited form.

Side 2 is a stretch of new, live Doors originals. For nearly a year between 1969 and 1970, The Doors recorded a lot of their performances to multitrack. The concept was to present an album of originals, including a definitive 'The Celebration of The Lizard', which was attempted during sessions for 'Waiting for the Sun'. The resulting album, 'Absolutely Live', was excellent, but the record label's insistence that the L.P. also include hits watered down the original concept.

For this side of the re-imagined 'Soft Parade', I have included songs from throughout the tour. It shows the band were not short on originals and already a wider picture of their 1969/70 output is revealed. 'The Woman is a Devil' is actually a studio jam, but one I've always liked and it fits with the feel of this side.

Side 3 is for the string and horn overdubs material. It was producer Paul A. Rothcild that insisted on the overdubs, as well as multiple takes in an attempt for perfection. Presented together on one side, they provide another theme to an already sprawling album. 'Tell All The People', 'Touch Me', 'Runnin' Blue' and 'Wishful Sinful' are all from the original L.P. 'Who Scared You' was originally the B-Side to the 'Wishful Sinful' single, bizarrely left off the album.

Side 4 is a come down of sorts, but contains longer and more strung out pieces. 'Orange County Suite' was infamously overdubbed by the surviving Doors in the 1990's. It is an original from 1969 and it remains a mystery as to why it never appeared on any contemporary Doors release. 'Whiskey, Mystics & Men' appears for a second time, slightly more demented than the first. The album finishes like the original, with its title track. 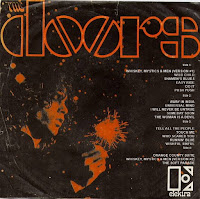 Email ThisBlogThis!Share to TwitterShare to FacebookShare to Pinterest
Labels: Doors

this is turkish, i would like to appreciate your good work in my native language.

unlike most people i've always liked this album. thank you for an interesting listen!

I've also always enjoyed this album, like I give a damn about other people's opinions :-D

An album that I have always liked. In fact the first Doors album I heard.
Thanks for this.

I, like a few of the contributors, also think that the Soft Parade was/is a great album. Was never a fan of the Doors..was the only album of theirs that I cared for.