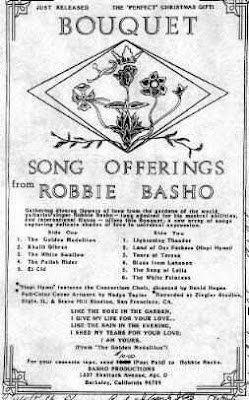 For those new to the artist - Robbie Basho was a pioneer of contemporary acoustic guitar. He took his name from  Japanese haiku poet Matsuo Basho, adopted the steel string acoustic guitar from John Fahey and was introduced to folk music by Max Ochs. After hearing Ravi Shanker, Basho used dropped tunings and developed his 'Esoteric Doctrine of Color & Mood for12 & 6 string guitar'.

Basho released several albums between 1965 and his death in 1986. These records covered Eastern mysticism, the old west and European folk. The majority of this discography has yet to be reissued.

'The Seal Of The Blue Lotus' (1965) and 'The Grail And The Lotus' (1966) were Basho's first two offerings and remain his most well known work. Both of those albums were instrumental and focused on Basho's long raga inspired guitar workouts.

Bouquet was Basho's penultimate album and by this time he had incorporated vocals, piano and spoken word into his music.

This album has since been re-issued. Check out a post about it here.
Posted by itslostitsfound at 13:00 1 comment: 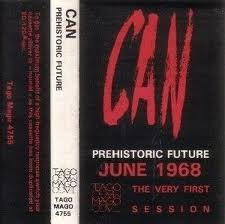 
Spontaneously composed by Can at Scholss Nörvenich, West Germany, June 1968. This is the first ever session by Can. The core line up of Karoli, Czukay, Schmidt and Liebezeit are augmented by David Johnson (flute, tapes) and Manni Löhe (vocals, percussion, flute).

Originally released  in France as a limited edition cassette. 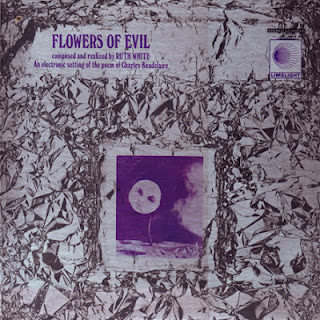 Here's the artist on the record :

"To me, Baudelaire's poems are of such unique power that they always seem to rise above the level of the personal and sometimes existential nature of their content. In this composition, I have attempted to parallel the transcendental qualities of the poetry through electronic means.

For the words, I used my own voice as the generator of the original sound to be altered or "dehumanized." This seemed practical since my experiments with the medium were too time consuming to have been easily accomplished with a collaborator.

To modulate my voice, I used a variety of techniques. Changes of timbre were achieved with filters. Tape speed changes were used to control pitch. Into the shape of some words, I injected sound waves and white noise, thus changing the quality of their sound but not the flow of their delivery. By adding reyerberation, I varied atmospheres and decreased or increased space illusions. To accent special words or phrases, I used controlled tape delays. Choruses were created by combining slight delays with multiple track recordings.

The musical settings around the voice were made with music concrète materials, a moog synthesizer, other electronic generators and conventional instruments, which were usually altered electronically.
In the translations, there was no attempt to rhyme the verse as in the original french poems. I tried only to keep the language as direct and simple as possible, for I always found that the dominating power of Baudelaire's ideas were in themselves of electrifying force."
Posted by itslostitsfound at 12:58 3 comments: