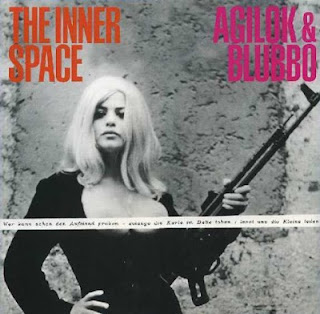 
Agilok & Blubbo is a political satire released in 1969, directed by Peter F. Scheneider. Irmin Schmidt was approached for the soundtrack. Fresh from a trip to America, Schmidt has recently decided that his musical future lay in experimental rock music, and not in avant garde classical which he had spent years studying. He assembled a group, The Inner Space, which featured himself, Holger Czukay, Jaki Liebezeit and Michael Karoli. Also included at this time was David Johnson and, as guest vocalist, Rosy Rosy. (That's her on the sleeve, actress Rosemarie Heinikel in a still from the movie.)

Only a single of 'Agilok & Blubbo'/Kamerasong' was released at the time, but in 2009 the tapes of the full soundtrack have been remastered and released.

Agilock & Blubbo find the members of Can creating the musical language with which they would become so fluent in a matter of months. The very next month in fact singer Malcolm Mooney would join and sessions would begin for 'Meet Thy Pnoom' (later named 'Delay 1968').

What you have here is embryonic Can, recognisable snatches can be heard in the insistent drums and bass or in an edit here or there. Not yet the demented garage band of 'Delay' but a bunch of artists discovering a shared love of invention and innovation.

"Blow your mind and move your crutch, tie the double noose of pnoom!"
Posted by itslostitsfound at 15:58 7 comments:

Email ThisBlogThis!Share to TwitterShare to FacebookShare to Pinterest
Labels: Can, Inner Space, Soundtrack 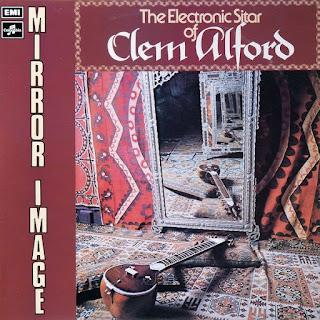 In 1968 Clem Alford travelled to India to study the sitar with Pandit Sachindranath Saha, when he returned to the U.K., he set about forming a group. In 1969 the Windmill label released the eponymous 'Sagram', a semi traditional sitar record complete with exploitation cover art. It didn't sell well and was also misspelled, it should be 'Sargam'. Clem's next project was a fusion of Folk and classical Indian music called 'Magic Carpet'. Their self titled record was released on Mushroom records in 1972.

In 1974, Clem Alford released his masterpiece 'Mirror Image'. This carefully conceived album has three instrumental tracks, side one being a modern Indo-jazz fusion take with Wah Wah sitar and side two having two tracks of traditional classical Indian music.

The two traditional ragas on the second side show Clem's depth of knowledge of classical Sitar composition but the real jewel here is side one's title track.

From the sleeve notes :

"Mirror Image is an intriguing record, rich in sound and new in musical and philosophical concept - an aural portrait reflected in a series of mirrors, creating a collage of vision which diminishes in time and space. Time and space are the 'veil of illusion' which hides the unity of material things, for in reality there is but one."

John Mayer, creator and pioneer of Indo-jazz fusions and author of these sleeve notes, obviously anticipated criticism from the folk purist crowd. Here's how he signs off :

"This album must be listened to with an open mind, for if the new electronic sounds of the sitar in 'Mirror Image' and the dichotomy of styles on the two sides of the record seem alarming to the purist let him remember that rigid customs and die-hard traditions are the great barriers to world integration."

Posted by itslostitsfound at 15:58 4 comments: 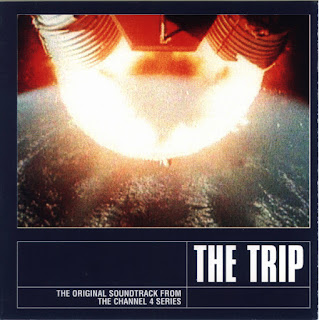 "In the early hours of the morning, the world changes. With 4Later, so does the television. The Trip, the first in a new line of ambient T.V. series designed for the last moments of the night, takes decades of space footage and rebuilds it as dreams. 4Later takes television past and present and replicates it for a different state of mind. The Trip is the space program you've been waiting for. 4Later, Thursdays to Sundays from around midnight to sometime later."

That is, to say, in 1999 Channel Four started making programs for people on drugs. The Trip was the best of those programs, although I also enjoyed Exploitica and whatever late night trashy movie was on.
The Trip was a collage of recently released to the public NASA films set to contemporary electronic music. It is the brainchild of producer Jacques Peretti.

The soundtrack album features music from the first series and works well as a sampler of electronic music from that period. There was an even less talked about second series, which in my opinion, was even better. It had a broader audio and visual base but neither has been released commercially. Below is a clip from an episode from the second series.

As a post script, it was during an episode of the second series that I first heard Electrelane, and for that I am eternally grateful.
Posted by itslostitsfound at 15:58 6 comments: