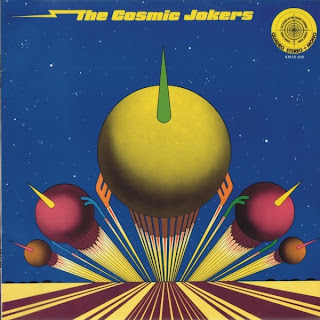 So you probably already know the story, but if you don't...

A lot of great music came out of Dieter Dierks' Berlin studio in the early 1970's. Ash Ra Tempel & Timothy Leary's "7 Up", Walter Wegmüller's "Tarot" and Sergius Golowin's "Lord Krishna Von Goloka" to name a few. The musicians on these records were dubbed 'The Cosmic Couriers' and included  Manuel Göttsching and Klaus Schulze of Ash Ra Tempel and Jurgen Dollase and Harold Grosskopf of Wallenstein.

Ash Ra Tempel even found time between sessions to record their classic "Join Inn". Fellow German heads Rolf-Ulrich Kaiser and Gille Lettman hit upon the idea of giving these musicians acid, letting them improvise and recording the results. What they didn't do however, was ask their permission to release those results.

And so, in 1974, Rolf-Ulrich Kaiser released 5 (!) albums made up from these sessions. Released under varying names (but now recognised under the Cosmic Jokers moniker) on Kaiser's own Kosmische Musik label.

Klaus Schulze had had enough by the fifth release and started legal proceedings. Kaiser went on the run.

It's a shame that these records have such shaky ethical beginnings because their is some fine music here.

The first album is almost an Ash Ra Tempel record. Göttsching dominates side 1, total space rock guitar with heavy hypnotic percussion. Side 2 belongs to Schulze and it sounds like a lot of his records at the time. Spacey, glacial electronic ambient.

Probably the finest Cosmic Jokers 'album'. But it doesn't end there.

Posted by itslostitsfound at 18:44 4 comments: 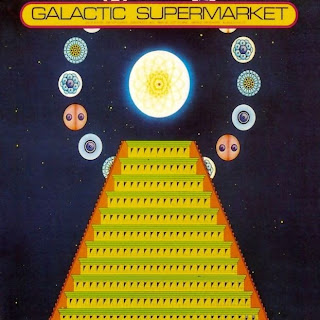 The second album comes from a completely different set of sessions. There is more of a Wallenstein influence here and is certainly more up tempo than the last L.P.

It follows the same path as the previous album (and a lot of Kosmische at the time) by have a guitar led space rock wig out on side 1 and deep space ambient on Side 2.

Not as essential as the first, but still worth your while.
Posted by itslostitsfound at 18:44 1 comment: 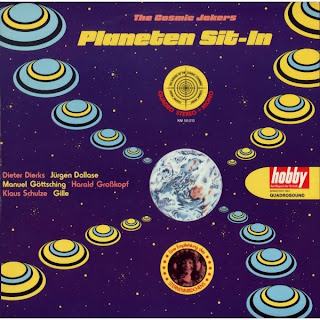 The third L.P. gets a bit of a hard time. Yes, the barrel may be being scraped here but the results are still great in places. Abandoning the side long pieces of music on previous albums, this draws together various sessions and sews them together in post production.

The results sound more like a cohesive L.P. than you might think. If this was released by some unknown Krautrock band and therefore didn't have it's wobbly ethical history, it would be hailed as a classic.

Don't listen to the naysayers, this is some good shit.
Posted by itslostitsfound at 18:44 1 comment: 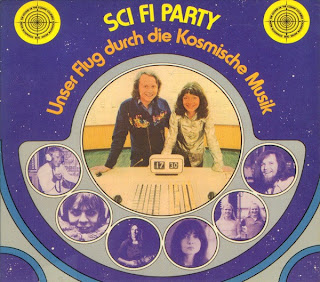 So this is probably the cheekiest of the Cosmic Jokers L.P.'s. It's essentially a label sampler drawing mainly from the previous three Cosmic Jokers albums, which, don't forget, were all released in 1974! This man could exploit!

It's an uneven listen and sounds very cobbled together. A more successful stab at roughly the same idea would come with the fifth and final Jokers album.
Posted by itslostitsfound at 18:43 1 comment: 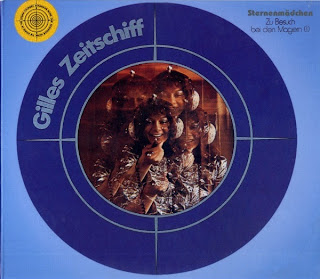 And so it ends.This final record is a far better representation of the Dieter Dierks studio scene. Including tracks from the classics mentioned in the first post, plus some choice Cosmic Jokers cuts, this is a kind of sampler, greatest hits and a remix all in one.

Tracks are remixed and mixed together with Kaiser's girlfriend's stoned warbling over the top.

An interesting idea and a good listen but the game was up. Kaiser was being sued, the label folded and as 1974 ended, so did The Cosmic Jokers.
Posted by itslostitsfound at 18:42 1 comment: