THE CHILDREN OF SUNSHINE - DANDELIONS 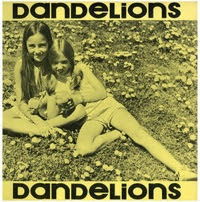 
Tres Williams and Kitsy Christner were both 10 years old when they recorded the album ‘Dandelions’. Encouraged by their guitar teacher, Tres and Kitsy wrote, arranged and recorded 10 songs. They used a picture from their school photography project for the cover, enlisted local musicians to help out and privately pressed 300 copies to sell to friends and family.

This album is beautiful. Confused observations about war, divorce and god sit along side joyful ditties about dogs, uncles and school. Contemporary folk is an influence (Judy Collins, James Taylor) but the songs and performances are utterly free of pretense. The voices and playing contain the kind of joy and charm that could only be written and performed by children as yet unburdened by the responsibilities and stresses of adult life.

This will be your new favorite record.

"It was just two years ago when we met each other — that’s when it all started. Jim CURRAN started giving us guitar lessons. After a while we always played together at the shows at school. Then we had a photography class with Frank. He taught us how to develop pictures and what a photographer should know. One day it was very nice out so we went over to the college to ake pictures and there was a great big dandelion field and so we thought why don’t we take pictures here. So we all picked some dandelions and posed in them. Frank took our picture and we developed it. In a few weeks we were together at Kitsy’s home for the weekend and Uncle Scott and Aunt Judy were there when we started to make up some songs. Uncle Scott said, “Why don’t you two make an album since you’re so good?” We said, “O.K.!” So we started making up songs and Kitsypractice doing our songs, so Jim said we should have a show of our own for the school just to get used to crowds. We did and we sang all our songs. Finally we had a whole bunch of rehearsals for the album and we had background people like Wendy and Mike — Mike played the drums and Wendy the bass. It really started to sound good so we had our first recording sessions. On our first recording session we recorded 4 songs but we only used two: “Dandelions” and “Tuffy”. In our second recording session we were tired of rehearsing and recording so we decided we were going to do them all that day. They all turned out good. The following Monday night at 8 o’clock we chose which songs we wanted to do which finished the album. We had everybody who wanted an album at the College School send in $5.00 to us. When we got pretty much money we finished the album and that made us very proud. We’d like to say “Thank you” very much to Jim CURRAN, Wendy KATZ, Mike KIEFFER, John MacENULTY, Uncle Steve (Uncle Harry?) and all the people who helped us make our whole album. TRES and KITSY"

Think The Shaggs, Beat Happening or The Vaselines but as two girls in the seventies.

Email ThisBlogThis!Share to TwitterShare to FacebookShare to Pinterest
Labels: Children Of Sunshine

Great stuff - thank you! Everyone should be lucky enough to have an Uncle Scott to dare them to make an album too.