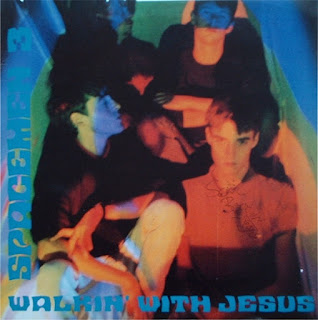 
Okay, so the tracks here aren't rare. However, it's been a long time since the contemporaneous output of Spacemen 3 was presented in it's original form.

This is the debut single, released a few months after the first album.

'Walkin' with Jesus (Sound of Confusion)' was recorded for the debut album, but went unreleased. This is actually a remix of a demo recorded in Northampton the previous year. Other songs from that session make up the posthumous release 'Taking Drugs to Make Music to Take Drugs To'.

The two b-sides were recorded in that same studio, shortly after the recording of 'Sound of Confusion'. 'Rollercoaster' is a re-recording of that album track, with less overdubs but an extended length of over seventeen minutes. 'Feel So Good' was a new track, which would be re-recorded for 'The Perfect Prescription' the next year.

You're welcome Anon, more coming in the following months.