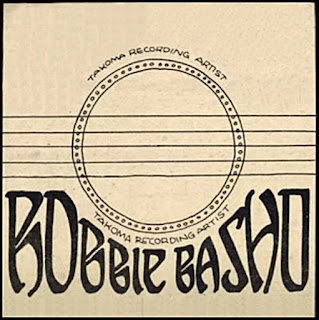 Not on label 2021
01 Medicine Raga
02 Lost Lagoon Suite
03 Untitled
04 Untitled [Incomplete]
Some recently unearthed Robbie Basho; a live set from the same year as 'Basho Sings!' and both volumes of 'The Falconers Arm'.
This soundboard recording popped up last year, many thanks to the uploader:
"In late 2019, fellow Neil Young fan and Reed College alumnus, Jim B contacted me. He said that Reed College alum Steve Halpern had a group of late 60’s/early 70’s Reed College recordings of Reverend Gary Davis, John Lee Hooker, John Fahey & Robbie Basho that needed transferring. In 1985, Steve found the recordings among a cache of reels in a Reed College library backroom while researching poet Lew Welch. It appeared that most of the reels were of official college business - board meetings etc, but others were student run campus events including lectures and music. He borrowed a few of the music related reels and transferred them using a reel to reel player from the library’s AV dept, to a radio shack “y” cable plugged the reel to reel’s RCA jacks into one of those ubiquitous, small, portable Panasonic cassette player/recorders. He doesn’t know if the originals were mono or stereo. The library was remodeled in 2008. As Steve was later told, most of the miscellaneous contents of the library was stored in bins in another building while the remodeling occurred. Steve thinks the reels, many of which had no labels, may have been discarded afterwords."
Basho's set was actually the first of the evening, earlier that night was John Fahey. more of that in posts to come...
Posted by itslostitsfound at 22:55

Many thanks for this.