Huggy Bear - For Every Wolf That Roams 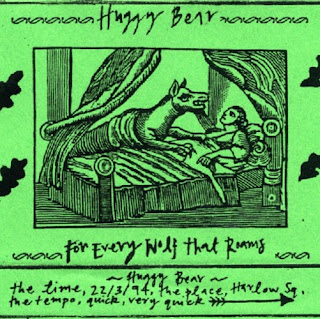 Famous Monsters Of Filmland 1994.
01 Katholic Kunt
02 Pansy Twist
03 How Scum Achieve #1
04 T-Shirt Tucked In
05 Limit 2 Surf
06 It's About for Every Wolf that Roams
07 Tuff Lovin'
08 Sizzlemeet
09 Steppin' on Bugs
10 Red Flipper
11 Teen Tighterns
12 February 14th
I was recently sorting out the discography of Huggy Bear for myself and a friend. I didn't realise this 1994 cassette was actually quite rare.
Recorded live at The Place, Harlow Square on the 22nd of March 1994.
Info from an archived webpage (via Discogs):
"This cassette was released in early 1994 and was an entire recording of a band playing a live gig at Harlow Square. The sound quality is pretty good for a live recording and this cassette showcases much of the bands material aside from Weaponry Listens To Love. This cassette was limited to only 57 copies and it came with handmade covers. This cassette was released by Famous Monsters Of Filmland"
Get our fill of live early 90's Riot Grrrl here.
Posted by itslostitsfound at 20:12

Thankx for the blog. Your work is really lovely and super enjoyable
<3